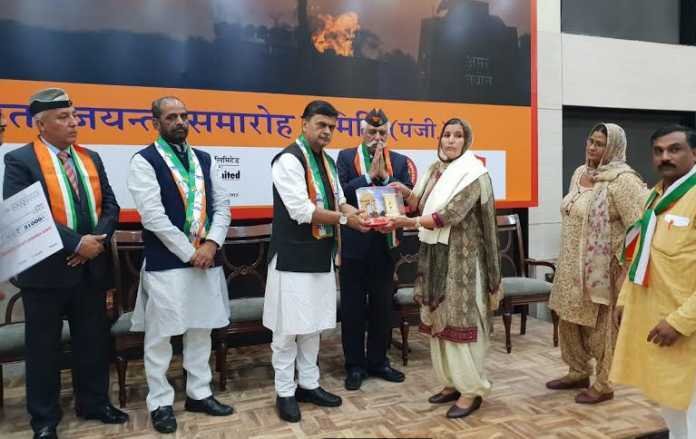 Delhi based NGO, Shri Geeta Jayanti Samaroh Samiti has taken an initiative to help families of martyrs from police and paramilitary forces. The NGO which recently organised an event ,’ Ek Shaam Shahidon ke naam’, on the occasion of August Kranti Diwas on August 9, had given awards to families of martyred soldiers and officers, announced that it would bear expenses of marriage of daughters if families are financially poor.

The programme organised in the Constitution Club of india was attended by families of 21 martyrs who came from different parts of the country. Union Minister of State for home Hansraj Gangaram Ahir, and Union minister of state for Energy( Independent) R K Singh were chief guests while Major General ( Retired) G D Bakshi and Brigadier ( Retired) Khushal Singh Thakur were special guests at the programme. Families of martyred soldiers and officers from Indian Army, CRPF, CISF, ITBP, BSF and SSB were given awards besides Delhi and Haryana police. Each family was given emblem, a shawl and a cheque of Rs 31,000.

During the programme, a blind girl Atwina Qureshi sang a melodious song,’ Aai mere vatan ke logon…jaraa aankh mein bhal lo paani..In his address, Maj Gen Bakshi narrated story about his elder brother who was martyred in the 1965 war. Audience got emotional when mother of late jawan Mandeep Singh was invited on stage for award. In October 2016, the barbaric incident at the LoC in Kashmir in which the body of an Indian Army jawan Mandeep Singh was mutilated had sparked an outrage. He was killed by terrorists, reportedly aided by the cover fire by Pakistani Army.

Brigadier ( Retd) Khusal Singh Thakur who played a crucial role in Operation Khukri’ spoke of his role in Kargil conflict. President of Shri Geeta Jayanti Samaroh Samiti, Raj Kumar Bhati said that his organisation would offer help in marriage of daughters of martyrs if these families approach them for financial support. His organisation is working out modalities in this regard. Needy can contact the NGO individually or on website.Rakshaknews.in was media partner in this programme.