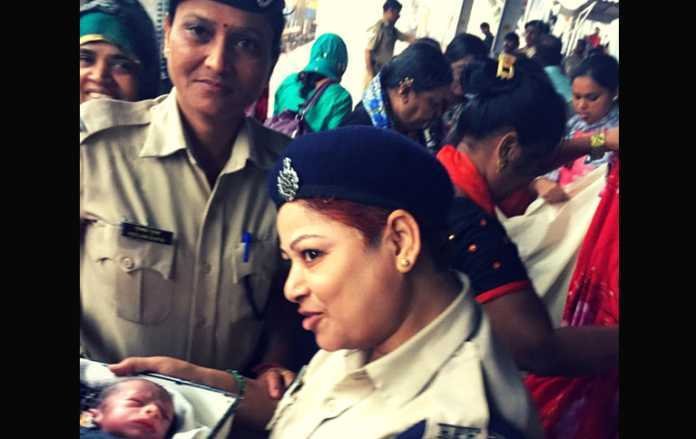 For Shaikh Salma Tabassum, two RPF woman constables Neelam Gupta and Surekha Kadam are like demi-Gods. An expecting mother Tabassum boarded the train LTT Visakhapatanam express train bound for Hyderabad on Sunday morning around 6.55am from Lokmanya Tilak Terminus. Accompanied by her husband Aslam Shaikh, a security guard in Mumbai and her parents, Tabassum was going to her parents’ home for delivery; her due date was in August. Around 7 in the morning she suddenly developed labour pain. At that time the train was between Thane and Kalyan stations, her family immediately alerted railway officials .

On being informed,the officials of Central Railways got into action. On-duty Sub Inspector Nitin Gaur, along with RPF lady staff, Head Constables Neelam Gupta and Surekha Kadam swung into action and attended to the woman at Kalyan railway station in the presence of Railway Medical Staff. According to Gaur, they had received the call around 7.35 am that a passenger was in labour. Howerver, a team with women constables and medical staff rushed to platform number 4 of Kalyan station immediately. But by the time the train reached Patri pool, near Kalyan station, at 7.45am, the passenger had already delivered one of the twins, a girl. The baby boy was delivered after the train pulled into the platform at Kalyan station around 8am, with help from the medical staff and two RPF women constables.

Tabassum’s husband Shaikh who initially seemed nervous, said that by the time the train reached Kalyan station’s platform number 4, his wife Tabassum had already delivered a baby girl. On reaching the station, she delivered a baby boy. After the delivery, she along with her twins was taken to Rukmanibai hospital for further treatment and care. The mother and twins are reportedly doing fine.

For Tabassum, this train journey would always remain `special’ because she became mother of twins in train. New mom would always remember Neelam Gupta and Surekha Kadam because duo helped her at a time when she was giving birth to twins. Giving birth is a significant life event for any woman because she aims for a healthy baby.The hospital doctor said that the babies and their mother are safe and healthy. The twins, a girl and a boy, weigh 2kg each. They are expected to be discharged after two days.