Home Police Undoubtedly, he was the best : A tribute to a real Police...

It was a smart farsighted contemplative move on the part of the Union government to saddle a challenging responsibility of policing Indian Capital on the strong, mature shoulders of Ved Marwah, during April 1985. The catastrophic calamitous tragic assassination of Prime Minister Indira Gandhi, triggered a massive schizophrenic quake sweeping all across the secular environs of Indian Union. Tremors were even registered in far-off islands of Andaman lying amidst tempestuous Bay of Bengal.

In month of November in 1984, while posted at Port Blair, everyone was saddened to hear broadcasting disheartening news about utter failure of Delhi Police to contain the unprecedented maddening violence sweeping across entire metropolis. I eagerly awaited returning back to Delhi during the coming summer after completion of three years tenure.

During August 1985, finally bidding adieu to picturesque Bay islands returned back for joining parent Delhi police. My first encounter with Ved Marwah was brief and introductory, not going well with bearings of my perceptibility. His enigmatic remark irked me for a long,” you must have forgotten whatever you might have learnt at Delhi after a tenure in Andaman”. My rhetorical attempt to rebut got nipped in the bud, with advice to rigorously study the prevailing scenario of Delhi, thereafter dreaming of a challenging posting. He dismissed me off in just five minutes.

Till coming November I was treated as a “superfluous spare Stepney”, ensuring protected persons (PP’s) remained protected, they were scattered all across Delhi, plus helping in preparing bizarre police reports.

Advent of Air Vice Marshal (Rt.) HL Kapur as LG Delhi, came in the form of guardian angel. A few days after assuming office during November 1985, he visited Kingsway Camp mess, for an informal acquaintance with Delhi Police officers. Ved Marwah, like all other officers while introducing me, remarked about my recent homecoming from Andaman and Nicobar islands.

The name of these islands ushered a high tide of nostalgia, whisking me away from gathering by placing his hand over my shoulder taking me in the far corner of the grassy lawn, LG inquisitively enquired about Nicobar islands. Recollecting memories of his wonderful days spent as a young Group Captain, commanding an Air Force unit at Car Nicobar. His departing remarks for Ved Marwah were,” we need officers like Virk for improving visibility of traffic police on Delhi roads”, this catapulted me to a prestigious assignment in Delhi traffic police.

Addressing a specially called meeting of AC’s P, Ved Marwah designated us as ‘Acting Police Commissioners’. “Gentlemen in the field you personally work on my behalf, you possess a magical potency of making or marrying; yours, mine, plus primarily the collective reputation of Delhi Police”. He continued, ” your conscientious perseverance can easily elevate the prestige of Delhi Police to unprecedented heights of esteem and glory”.

Driving to Palam airport PM Rajiv Gandhi disengaged from route at Teenmurti roundabout crisscrossing diplomatic area, reemerged at crossing of Simon Bolivar/Sardar Patel Marg.Trying to negotiate a left turn got intercepted by traffic policeman for preventing entry into barricaded VVIP route. Policeman approaching near his vehicle on recognizing him rather facilitated his smooth entry into Sardar Patel marg.

Colonel Maha Singh, ex-minister Haryana, on being prosecuted for over-speeding on Ridge road met Ved Marwah with my complaint.

He stated, ” your ACP appears to be totally lacking control and command over his subordinates, without waiting for me to apprise him of my credentials and discuss the issue, they issued the ticket”.

Ved Marwah retorted, “I have full trust and confidence in the supervision of men I command, why would they wrongly book anyone for exceeding speed limits which are monitored by sophisticated radar”. Sulking like a wounded tiger he mumbled,” you all policemen are made of the same stuff”, leaving his room in a hurried huff.

Once Ved Marwah asked me to contact Lt General (Rt.) Harbaksh Singh lives in posh West End in south Delhi. While ascertaining his whereabouts found his house rented to some foreign agency, failing to locate the renowned General. My explanation not only earned reprimand, but attracted some unpleasant remarks, “find General even if he lives in Timbuktu, get his grievance redressed, I don’t want him to ring me again on the same issue”. The General lived in one room annexe situated in obscure backyard, his complaint related to obnoxious disturbance by inmates of nearby taxi stand, which was satisfactorily resolved.

During flaring up of communal riots in the walled city on 19th May, 1987, Ved Marwah assigned me special Law and Order duty in Turkman gate area. One early morning our PCR van was fired upon from a window/ventilator of a residence amid a congested lane of Chitli Qabar. Promptly boomeranged a terse message from Commissioner of Police , “report how many bullseye have you scored”, such was his hawkeyed monitoring of the sensitive situation.

Later when Buta Singh, Home Minister of India was motoring for the disturbed area for an on-the-spot assessment of the situation, he made him backtrack citing prevalence of volatility in the area.

For every human being life remains a mixed bag of accolades and annoyances, which however hardly affect working of dispassionate personalities.

On 2’nd October,1986 commemorating the birth of father of nation at Rajghat, during visit of President Giani Zail Singh, a mentally deranged person positioned atop a ornamental canopy fired shots from a crude weapon. This so-called ‘renegade ultra’ had surreptitiously scaled the select spot covered with thick foliage, camouflaging himself within confines of bushy creepers well in advance.

Another mishap occurred while a motorcade of high Russian dignitary moved on South sunken road to enter Rashtra Pati Bhawan (The President House).

A overenthusiastic Inspector failing to apply presence of mind let vehicles of an Indian VIP from Dalhousie road side towards Hukmi Mai marg, turning left it faced Russian VVIP limousine coming from Vijay Chowk side. Over occurrence of these stray incidents there was an unprecedented commotional uproar fanned by some irresponsible politicians and an equally insensitive media battalions.

Raja Vijay Karan was nominated for taking over baton from Ved Marwah on Friday the 15’th April 1988. Ved Marwah specially selected me for chaperoning him to Police HeadQuarters, personally briefed me about every minute detail. He agreed with my suggestion that wearing a sword as part of ceremonial dress, might cause inconvenience to Raja Vijay Karan while accompanying him in his car. We mutually agreed for wearing of an official revolver.

Ved Marwah advised me to reach his Khelgoan marg residence well in advance and be suitably prepared for answering all his inquisitive queries pertaining to vital issues related to Delhi Police. In fact these crucial suggestions proved highly beneficial during my interaction with Raja Vijay Karan, who appeared to be completely satisfied with my brief logical answers.

On one occasion reaching his office during morning Ved Marwah hurriedly summoned traffic Inspector, ACP, DCP, Additional. CP (Security & Traffic), all together. DCP SBS Deol, Inspector Ramesh Kapoor myself upon entering his office got a unwelcome reprimand, “all of you were asked to report together, where is your Add. CP, bring him along”. We apprised Add. CP Dr. KK Paul, who too urgently rushed to the spot.

Four of us lined up attentively just like new recruits summoned in an orderly room, for listening to his sagacious words. Thus he began,” gentlemen repeatedly I have been stressing, traffic policemen at intersections must solely concentrate on traffic regulation and enforcement refraining from saluting me or other officers cruising up and down in their vehicles”. “Daily, I find breach of my orders, in spite of my frequent reminders, hereafter my instructions need to be followed meticulously, or else will be constrained to take drastic disciplinary action”. There was a pin drop silence.

Inspector Kapoor serving long in police had cultivated a thick crocodile skin but he also possessed an inherent talent of creating an atmosphere of hilarity in the gloomiest of gloomy situations. He was the one among us, who dared to break the impasse. He spoke, “Sir iconic aura of your superb personality is such that every policeman feeling your benign presence reflexively comes to a saluting position, making our daily briefing completely ineffectual”.

Ved Marwah giving him an obnoxious fiery look answered, “Don’t give me such lame duck excuses”. An eerie silence further continued to persist.

Kapoor calculatingly opened his mouth for the second time, “Pardon me your honor for straying away from the core subject, but does this scene not resemble the assembly of Mogambo”. Now the regimental orientation of restricting smiles got badly breached by a silent torpedo of hilarity, slowly all five of us present in the room burst into a fit of unrestricted, uncontrollable flow of laughter. Thereafter an gracious Ved Marwah offered us to be seated, along with a bonus hot cup of tea.

He remained easily accessible to all officers and men for his expert guidance and sagacious advice. Conferring of Padam shree in 1989, was an official recognition of his exceptional services to the nation, although he deserved an higher honor.

( The author of article is former Deputy Commissioner of Delhi Police) 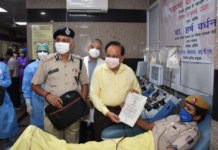