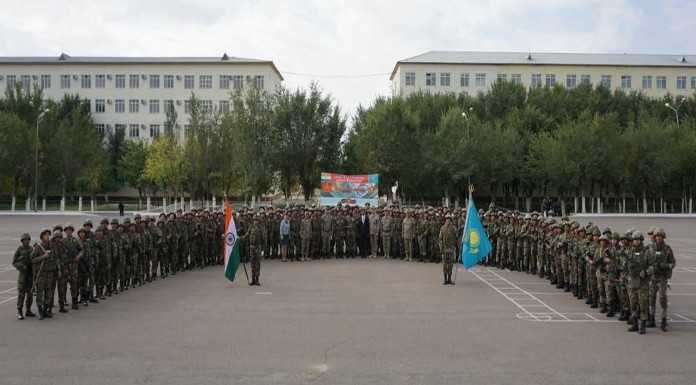 The joint military exercise Kazind 2018, culminated in Kazakhastan’s Otar military area on Saturday after two weeks of exercise. This was the third edition of joint military exercise between Indian Army and Kazakhastan Army. Considered as a significant step towards fostering military and diplomatic ties between the two countries, the primary focus of the exercise was to train and equip the contingents to undertake joint counter insurgency and counter terrorist operations in urban and rural environment under the mandate of United Nations.
Participants of two armies initially familiarised with each other’s organizational structure, tactical drills and planning process before graduating to joint tactical exercises. The contingents honed their tactical and technical skills in a wide spectrum of counter insurgency operations including joint training on weapons and equipment, cross training exercises, field training exercises and handling of improvised explosive devices. Both sides jointly planned and executed a series of well-developed tactical operations based on scenarios that are likely to be encountered in rural and urban environment. Commanders at various levels from both sides were exercised to work in close coordination to receive and collate information, jointly plan operations and issue suitable order to respective components. Subject experts from both the contingents also held in-depth discussions on various facets of counter insurgency and counter terrorist operations.
The exercise provided an ideal platform for both contingents to share their operational experience and expertise while also being instrumental in broadening the interoperability and cooperation between the armies of India and Kazakhstan. Present on the occasion of culmination of exercise were Indian Ambassador Prabhat Kumar and Chief of Staff, Fire & Fury Corps and Deputy to Chief of Land Forces, KazakhArmy.
According to official statement, the joint exercise will certainly foster the spirit of friendship and enhance the strategic military relationship between India and Kazakhstan to higher levels in future.